Our long-established reputation for quality and value has helped EYG Commercial secure a constant stream of sizable contracts on accommodation, housing, hotels and education developments across the UK.

And having put the finishing touches on a large number of projects in recent months, ranging in value from £100,000 to £1m, Joint Managing Director Nick Ward says a steady flow of significant contracts throughout 2019, and into this year, has been important.

“I think it is fair to say that we worked on many excellent projects throughout 2019 and for some excellent developers who we now have excellent working relationships with,” he said.

“The construction sector has been affected by all the economic uncertainty which has impacted on the country for the past couple of years, and of course has heightened now, and that has made it all the more important to do business with companies you know well.

“We have that in mind when we are pitching for work, and we know that from our side, developers know they can rely on us to do a first class job when they select us.

“The pleasing thing for us is we are finding ourselves being chosen for the same type of work again and again, as we have built a reputation for getting the jobs done to a high standard, on time and in budget, at a good price.

“We have really seen growth in the new accommodation sector over the past couple of years, and our work on new hotel developments is also bringing in repeat work, as is the education sector.

“These are significant contracts, anywhere between £100,000 to £1m depending on the size of project, but these are the type of projects every business working in construction wants and needs, where perhaps the huge contracts are not quite as attractive as they once were and continuity is key.

“Over the past six months we have brought contracts well in excess of £4.5m to completion.”

Included in the significant accommodation glazing work carried out by EYG over the past 12 months was a £1m contract on the £24m Oldway House redevelopment in Swansea, for developers WRW Construction.

It saw a 13-storey former office block redeveloped into a mixture of 556 student accommodation units, offering spectacular views over the city and coast.

In the midlands we installed curtain walling and slate grey tilt and turn windows at the 15-storey Toybox development in Birmingham, which has seen the old former Birmingham Nautical Club site converted by Torsion Group into 290 luxurious student flats, in a contract worth in excess of £760,000. 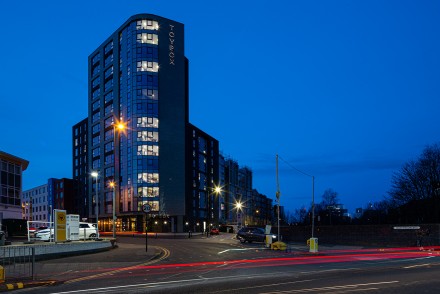 Also in the accommodation sector was a £700,000 contract with United Living on the Silbury Boulevard contemporary housing development in Milton Keynes, where 140 modern new homes have been provided for rent in an area which has been the focus of regeneration.

In the education market, EYG’s glazing expertise was called upon by the Mid Group developers in Dagenham, completing a £1m contract for the new primary and secondary Lymington Fields School.

EYG Commercial also continues to be the firm of choice for many leading hotel developments, including a recent £200,000 contract with WRW Construction on the redevelopment of the Holiday Inn Express in Swindon.