EYG Commercial has completed glazing a vast extension at the Wren Kitchen headquarters in Barton-upon-Humber.

£120m kitchen manufacturing and assembly facility, which is due to open this summer, spans one million square feet and will create a further 900 jobs at the sprawling site.

It is in addition to the existing headquarters, which opened in 2013.

EYG tendered for the contract last year and was successful, leading to us starting on site in November.

Work was finalised at the site this week, with EYG Commercial fitters having installed 61 AluK 58BW windows; and four GT55 single doors on the enormous extension.

A further two AluK SL52 curtain walling screens were installed at the gatehouse, where drivers will report to.

EYG was contracted by construction firm Buckingham Group, who we previously worked with on transforming an old airfield into retail units in Cambridge. 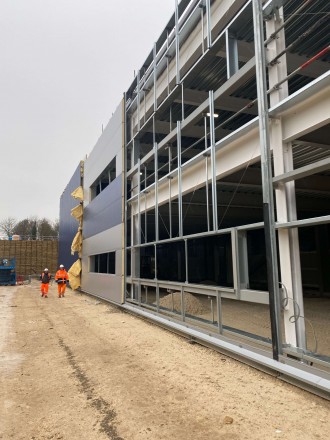 Neil Coxon, Senior Contracts Manager at EYG Commercial, said the client was satisfied with the work carried out, which was on time and without any issues.

“t was a pleasure to work on a local development which is going to create so many jobs for the area.

“The factory is enormous but the job was straight-forward and carried out efficiently, from design through to fitting.”

“We were therefore thrilled to be tasked with manufacturing and fitting our commercial windows and doors on this development.

“The installation went smoothly and is a testament to the skill and commitment  of the installation team and the team in the office who worked hard to ensure all of our client’s needs were met.”